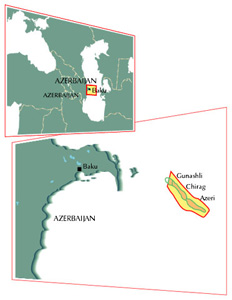 In 1996, CIECO established ITOCHU Oil Exploration (Azerbaijan) Inc., a wholly-owned subsidiary, to acquire a 3.9205% interest in a Production Sharing Agreement (PSA) for Azeri, Chirag and Deepwater Gunashli (ACG) fields. CIECO's participation in the ACG Project marked the first time that a Japanese or East Asian company had ever become a partner to a PSA for this region. The 30 years term PSA was often referred to as “Contract of Century”. It was planned to operate exploration, development and production in ACG fields till 2024.

In August 2010, acquisition of an additional interest was performed by purchasing the stake held by Devon Energy who decided withdrawal from ACG and the ITOCHU’s interests was increased from 3.9205% to 4.2986%.

Currently 8 platforms are in operation. In August 2016 the cumulative oil production from ACG fields reached 3.0 billion barrel. The oil produced from offshore platforms is gathered and treated at Sangachal Terminal near Baku. Then it is mainly transported via Baku-Tbilisi-Ceyhan Pipeline.